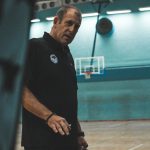 One of the most accomplished players and coaches in history of British Basketball, Coach Sam Stiller is in charge of our men’s team competing in division 2.

Coach Stiller had a pro career that spanned over two decades both domestically and in Israel, whilst also representing England and Great Britain internationally. During his playing career in UK with Cadburys Boost Kingston he had a chance to compete against powerhouses like Barcelona, Real Madrid, CSKA Moscow or Maccabi Tel-Aviv. He is known as one of greatest shooters that UK ever produced.

After retiring from playing, Sam eventually got into coaching, where he helped take NASSA from Division 4 to Division 1 from 2010-2013, whilst picking up three consecutive Coach of the Year Awards, and then picking up another one in 2016-17 with London Westside. Coach Stiller then moved to Israel where he worked at HAPOEL Nesher.

The summer of 2021 saw Sam return to the UK and we are truly fortunate to have the services of such an experienced coach to help us build the Men’s side of our basketball program.